We moved a funny old home-made brick urn into a flower bed and filled it with water, to match a similar one that we use as a bird bath. We’ve not seen many birds, but it is in full use.

In January 2009 I succumbed to an offer – a so-called Garden Bargain mini Orchard. I received three bare-rooted named fruit trees: a Moorpark apricot, a Victoria plum and a Sunburst cherry – all guaranteed to flower and fruit in the first year. I planted all three, but was concerned about the resin oozing from a wound on the apricot – I was told to report back again later in the year. Neither the cherry nor the apricot flowered in year one. The plum flowered; it looked remarkably like an apple, but as a late frost wiped out the blooms, I couldn’t prove it. The apricot continued to weep, but I had to agree that it was still alive.

Year two, still no flowers on the cherry or the apricot. The plum was definitely an apple, but the fruit fell in a late frost before I had photographed it. The apricot was still alive and its wound beginning to heal. I stopped making any attempt to contact the vendors.

Year three – nothing. We moved the apple and bought a Victoria plum.

Year four – March 2012. The not-plum apple flowered well and set fruit, the new real plum flowered, but did not set fruit. The cherry had a couple of blooms, but no fruit. The apricot flowered, looked stunning, and set some fruit. Late frosts again wiped out all fruit. 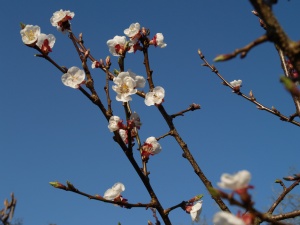 Year five – three blooms on the apricot and no fruit. The new plum, the not-plum apple, and the cherry flowered and have growing fruit. I can’t wait. I have no idea what kind of apple the ‘plum’ will turn out to be.