Let’s hear it for non-fiction! I have just had the most entertaining and informative week (and I get to write a seriously disconnected title for a post).

Curt Mekemson‘s book, The Bush Devil Ate Sam…And Other Tales of A Peace Corps Volunteer in Liberia, West Africa, is an important record and a serious story, yet told easily, and with delightful humour. This is one of the most satisfying books I have ever read, because it entertained me thoroughly AND made me feel better informed. 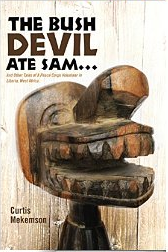 In America in the 1960s, Berkeley was one of the cradles of independent thinking. Here, youth, hope and idealism produced (for a while) creative, open-minded solutions to world problems. Curt was there and tells us how it really was.

From there we go with Curt and his wife, as raw Peace Corps recruits, to Liberia. Curt never fails to spot the funny elements of his varied adventures and he writes with an pleasing straightforwardness. Their lives as told are crammed with, hair-raising, deadly serious and laugh-out-loud details.

The story is brought up to date with a resumé of the events of the breakdown of the country in the 1980s and the current fragile peace including the testing events due to the appearance of the Ebola virus.

In spite of Liberia’s  difficult and often tragic past, reading Curt’s memoirs in The Bush Devil Ate Sam gave me a sense of hope for the country and the wider continent.

My other book, 84 Charing Cross Road, is a smidgeon of a story – 96 pages of short letters   from 1949 to 1969 between Helene Hanff, a New Yorker, and Frank Doel, who works in an antiquarian bookshop in Charing Cross Road. The contrasts between Britain, book-rich and food-poor, and America, the reverse, shape the correspondence. 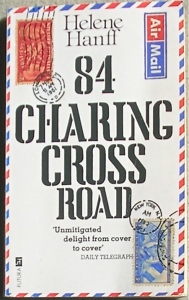 Helene’s voice  is totally original and utterly beguiles not only Frank, but all the staff at Marks and Co Booksellers as does her generosity during the rigours of rationing.  This book was an instant hit on publication and there is also a film (with Anthony Hopkins and Anne Bancroft), which I am aching to see.

The edition I bought (secondhand) includes the sequel, The Duchess of Bloomsbury Street, which I also highly recommend. This is another very short book, all taking place in 1971 in London, as a consequence of the publication of 84 Charing Cross Road and provides a satisfying coda to it. These two records reveal the wonder of England and English literature through post-war American eyes.