This about opera, but I have a feeling I’ve been sent a lesson about writing too.

Last night I went to a performance of one of Verdi’s lesser known operas, La Forza del Destino – correction, since I saw it in English – The Force of Destiny. Powerful stuff, you might think, with a title like that. Well certainly complex, with a lifetime of doomed love and revenge for all three of its main characters.

The music for this opera is sublime; a parade of moving tunes and orchestral subtlety, with some humour and drunken revelry to lighten the inevitable fated march of all concerned. It is, however, VERY difficult to stage. It takes place in both Italy and Spain over a number of years, includes battles, pub scenes, a church and a hermitage.

This director opted for The Spanish Civil War (Verdi set his battles in Italy) and EVERYTHING else he could lay hands on. War is not funny, so all of the humour was stripped out (funny arias and characters turned particularly nasty). War is cruel, sadistic and misogynistic – true – so all these factors were hammered home. However, you can actually have too much of a bad thing. When the audience starts to wonder how far the priest is into S & M, or what they are using for blood (in every single scene), or why a warhorse is hovering over a building and was there really a public tearing up of books in that war, and surely that bare girl running was from Vietnam, you have lost the plot and replaced it with too many ideas. You have also splintered your viewer/listener’s attention. 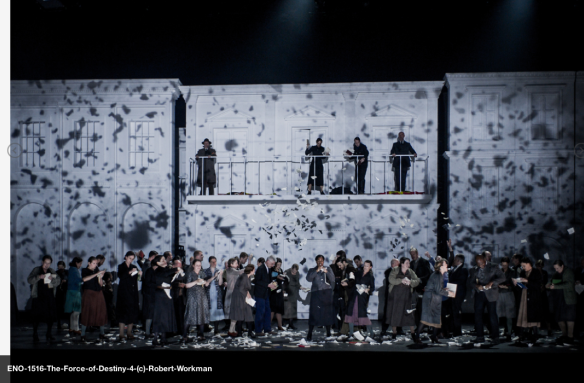 Verdi wrote a classical tragedy, in which the fates deal cruelly with three particular people in a volatile world. The drama of their story deserves as much respect as the music and much more than the setting.

I have another problem with this production. I go to opera for the music and the drama. Understandably, musical ability trumps all else when casting. However, if the director chooses singers who have no physical resemblance to, or are of a different age from, the people they are playing, he/she should (at the very least) minimise the discrepancies by adapting costumes and staging where necessary so that the drama is not lost, or the singers made a mock of, OR the opera become the joke stereotype of its genre (as this was in the first act – image below).

In the centre (back to us) you have the beautiful, pure, young woman, whose father (left) refuses to let her marry the young soldier (right) because he is not noble. After killing her father in error, the soldier flees and later (disguised) will become a hero in the army and blood-friend of the girl’s brother (see image 2 above). This brother (also disguised) is searching for the soldier and his own sister to kill them. The girl (not much disguised) enters a hermitage. Everybody dies.

Finally, you can say stuff in Italian that sounds absurd in English. Italian words end in vowels (of which there are few) so many of the lines naturally echo each other. This is emphatically not the same as a rhyming couplet in English, which, unless handled by a skilled poet, often has a nursery rhyme humour to it.

Hope you enjoyed the pictures – all screenshots from the English National Opera website – if not the rant.

23 thoughts on “Too many ideas spoil the plot”