“And if by chance I am killed, then you must just take a little more concern in your own lives and those of Barton & Alan & their offsprings. Mourning is of no use & there could be no better thing to die for. […] Very Best Love from John.”

John Custance Baker was born in Penang in Malaya in 1921, the youngest of three boys. He was small, weak and suffered from asthma. As he grew up, he became quiet, humorous, patient and loved by all who came in contact with him.

John was under five when he was sent to England with his brothers to be brought up by his grandfather and great aunt. His father visited whenever he got leave from his Colonial Civil Servant duties in Malaya, his mother a little more often.When he was seven or eight there was a letter from John’s grandfather to his mother saying: “I am deeply grieved to have to tell you that John has got pleurisy.” In her private notebook his mother wrote “John, frail little John … & three weeks of sea and land between us.”

He survived, though his childhood, including boarding school, was often spent with oxygen cylinders under his bed. His brother Alan wrote in his memoirs: “[John] never complained about anything – all his short life.”

He did have at least one asthma-free period when his mother came and took him, aged ten, to live for a year in the French Alps. He learned to ski, speak French and – so long as he remained above 3000 feet – he stayed free of asthma. He continued to return to mountains whenever he could.

John followed his older brother, Alan to King’s School Canterbury. Both boys were the smallest in their year and stayed small; both coxed for the school rowing team for record stints.

On leaving school in 1939 John decided to take up agriculture believing that he managed better out of doors. 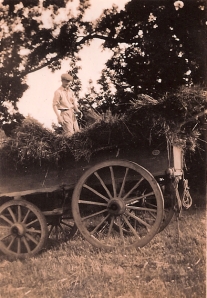 He had started a student placement working on a farm and grew fit and strong. However, on 18 November 1940, without informing his family, he enlisted in the RAF. His records show that he was 5’4” with a chest measurement of 29”, Medical Category Grade III [Those who present such marked physical disabilities or evidence of past disease that they are not fit for the amount of exertion required for Grade II]. John seems to have contested his medical grading, and although it was not altered on his records, in March 1941 he was categorised as ‘Fit All Aircrew’ and then recommended for training as ‘Obs. only’ in February 1942. By June 1942, his mother mentions that he is training to be a navigator and in December1942 his records show he is U/T Nav. 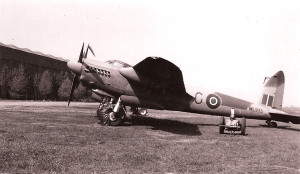 In May 1943 his records mention ‘Mosquito conversion’. Then in August 1943 he joined 139 (Jamaica) Squadron as a Flight Sergeant under training as a navigator, just after the squadron moved to Wyton, Cambridgeshire.  He went on his first operations (bombing raids), to Duisberg and then Cologne, in Mosquito IV DZ423 with Flying Officer E A F Jackman. In September, on his second sortie, he reported: “Bombed from 28000ft. One a/c had encounter with a nightfighter, and one made an unorthodox and exciting departure from a searchlight cone. He regained control at 19000 ft and came home without further trouble.”

John continued to fly bombing missions with Jackman, several to Berlin (13 sorties), until October when he was transferred to No. 1409 Met Flight at Oakington, Cambridgeshire. There he met and flew with several pilots including F/O (later Squadron Leader) Joe Patient DFC. At the end of his book A Tale of High Adventure, Joe reminisces with a close friend: “We share many yarns and memories of the past, remembering especially the irrepressible humour of Tommy Forsyth, the quiet humility of Johnny Baker, and the outstanding qualities of many [other] comrades…” 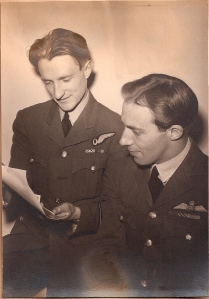 On 26 November 1943 F/O J M W Briggs, Pilot, arrived and two days later he was test-flying Mosquitos with John as navigator. On the 29 November the squadron learned that Briggs had been awarded the DFM and promoted to Flight Lieutenant. From then on Briggs and Baker were a team and only occasionally flew with other pilots/observers. On 30 December John was promoted to Flight Sergeant. In January 1944 the Squadron moved to Wyton and in March John received his commission as Pilot Officer.

In early 1944, John shared a room with another observer/navigator Pilot Officer George Cash. George remembered John well: “… not argumentative in any way… he would invariably contribute a sensible observation…a witty remark… He was a highly intelligent fellow, well spoken… a quiet chap… not very tall in stature and certainly not very robust.”

George remembers returning to his room one day and finding John with the window open waving smoke away. Puzzled, since John did not smoke, he inquired and John explained that they were (Potter’s) asthma cigarettes and he asked George not to mention this to others. 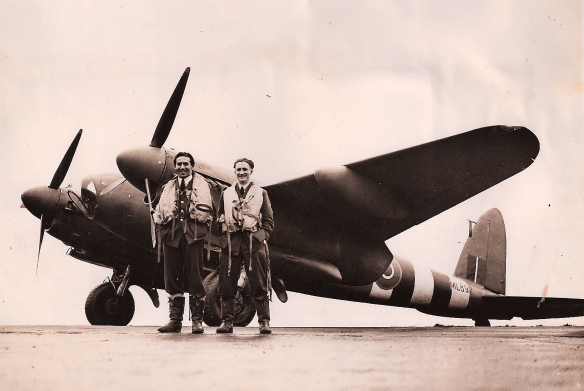 Throughout 1944 Briggs and Baker went on PAMPA (Photorecce And Meteorological Photography Aircraft) missions, sometimes two in one day. These were often long distance and always dangerous, though John refers to one along the French coast as a pleasant “beachcomber”. They had some near squeaks, as when their Mosquito swung off the runway on landing due to bullets through the starboard tyre and wing petrol tank, of which they had been unaware.

On 4 May 1944, about 25 minutes into a flight, John became unwell and they had to return to base, but by 8 May he was well enough to fly on another mission.

In September 1944, with Squadron Leader (later Wing Commander) Nigel Bicknell DSO, DFC, John had an hour of dual flying. Nearly all crew members were able to do more than one job in an emergency and in a Mosquito, stripped down for speed and with a two-man crew and no guns, it would be important that the navigator could, in an emergency, fly. 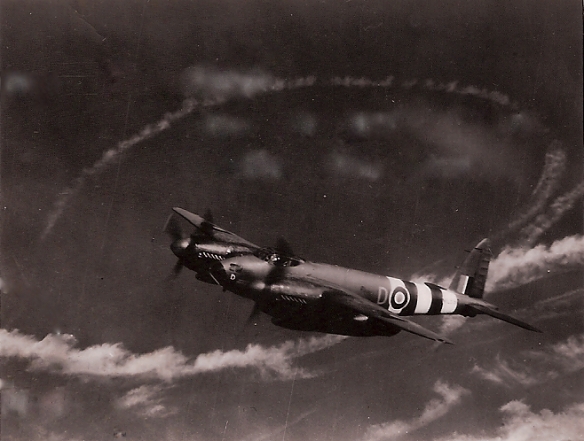 On 15 October Briggs was awarded the DFC and so was John on 17 October (“…for exceptional meteorological ability…great determination… accurate data brought back… an example to other observers…”) . Most of their missions were PAMPA, photographic or meteorological, but occasionally they carried and dropped bombs. As well as the planned PAMPA flights there were daylight ‘snooper’ missions to photograph areas bombed the night before, and ‘stooge’ missions, which seem to have been open-ended recces.

On 27 November there is an interesting entry for a ‘snooper’ mission to Neuss: “3 runs, H+60, H +88, no bombs carried – on return a/c did not respond to controls properly at low speeds on approach, and after several attempts a landing was made. The a/c swung and crashed at 23.05. No damage or hurt to crew. Baker [John] observes: ‘this does not create a precedent for this type of landing!’”

In January 1945 Maurice Briggs and John Baker (now a Flying Officer) were posted to HQ training command. Maurice had completed 145 sorties, Johnny 115, and they had flown 105 of them together. 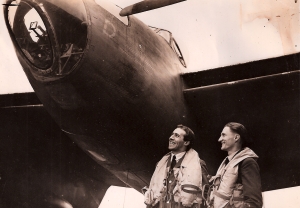 In March 1945, Briggs was awarded a DSO to add to his DFC and DSM and John received a bar to his DFC (for…”exceptional courage, outstanding skill and unfailing devotion to duty…”). In April they flew to Canada to ‘help put over the Victory Loan’. They set off in D for (-Dog or -Dorothy) but soon returned as it had problems and instead took F for Freddie – a veteran of some 211 operational flights.

In April John returned briefly to the UK to be best man at his brother Alan’s wedding on 13 April. He was lucky to miss his flight (which went down with all passengers) and crossed the Atlantic on a later one. He returned straight after the wedding and he and Maurice continued touring Canada with F for Freddie.

On 3 May 1945 John’s sister-in-law, Phyllis, wrote in a letter to a family member: “Do you know that John has acquired a bar to his DFC? One day we may learn what for – but not from him, I imagine!”

Then on 9 May they reached Calgary and, as Richard de Boer writes, “put on an aerial display over, and literally through, Calgary that took people’s breath away, buzzing downtown at levels lower than the roof of the Palliser Hotel and the Hudson’s Bay Building (just 6 storeys high).”

The following day, after an official lunch and some necessary work on the aircraft, they set off to visit two other airfields. They made two passes over the crowd and on a final daring pass clipped the wing on the metal pole above the control tower and crashed, killing both Maurice and Johnny instantly.

There were many, many letters of condolence and many reports in newspapers. Among the letters is one from John’s old commander, Nigel Bicknell, to John’s father:

Dear Mr Baker, this is not a standard letter of condolence, as I stopped being in charge of 1409 Flight over six months ago; but while I was there we were such a happy family that the accident at Calgary upset me more than any of the many deaths I have come across in the war. I was surprised to feel like that about it, but I suppose I felt responsible in an indirect way, as it was my idea to show off one of our Mosquitos across the Atlantic, and I did everything I could to make the Air Ministry and DeHavillands interested.

Johnnie’s effort of many operations with our unit always amazed me because of his physical condition which obviously wasn’t what ours was. It was absurd him doing a job like that,  but obviously very admirable by war-time standards. I remember discussing it with our pleasant medical officer many times: he knew that Johnnie should not really have been doing such a job, but he had obviously been so determined to do it that it was grossly unfair to put a stop to it, and also he was so competent that we were loth to lose him. I remember also taking various important visitors to hear his reports on returning from a trip, because they were undoubtedly the most complete and concise ones we ever got.

In spite of the difficulty our incredibly hectic summer must have been to him, he was all the time very easy to get on with indeed. Often if I wanted to get away from the war and aeroplanes and talk about something else I would go and look for Johnnie…

John was totally happy and fulfilled in his work. He was a willing, if unlikely, hero. 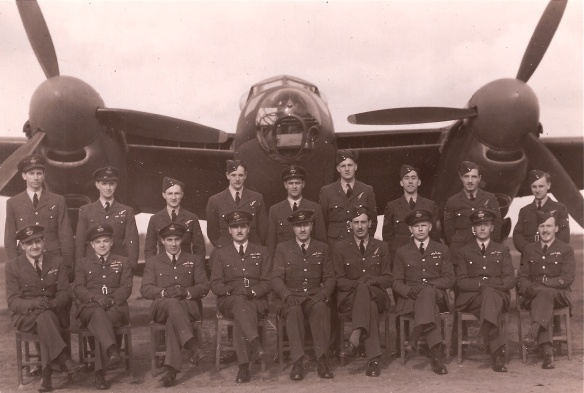 Thanks go to Richard de Boer and Mike Cox for keeping Maurice and Johnny’s names alive, for research and for stimulating John’s family to see his legacy in the outside world.

21 thoughts on “A very unlikely hero”