Border Line will be released tomorrow… except that two days ago Amazon took the print book off the UK site. A friend who had pre-ordered the book had the order cancelled and received an email saying… ‘Our supplier has informed us that it’s been discontinued and is no longer available.’

I, the publisher, supplier and author, have sent no such information.

This came on top of increasingly frantic efforts to get a cover image for the print book onto the Amazon UK site. In the course of these efforts I discovered that Nielsen have been feeding out the image to Amazon since August, but Amazon are having problems with images and are still working on a fix.

At this moment, Border Line (print version), can be found by clicking on the kindle edition icon, then choosing ‘paperback’ from the list. This then shows it as unavailable, but you can put it on a wish list. If I had been trying to dream up a way to raise the blood pressure of a small publisher/author to danger levels, I don’t think I could have done better job than Amazon have achieved.

In the grand scheme of things these are trivial problems. So on the plus side, I have twice met the hedgehog outside the back door, either with his face in the trough, or waiting patiently by an empty one. We have had a visitation by a small flock of goldcrests, picking spiders off our window ledges. They were too swift to photograph, but they did reduce the blood pressure. 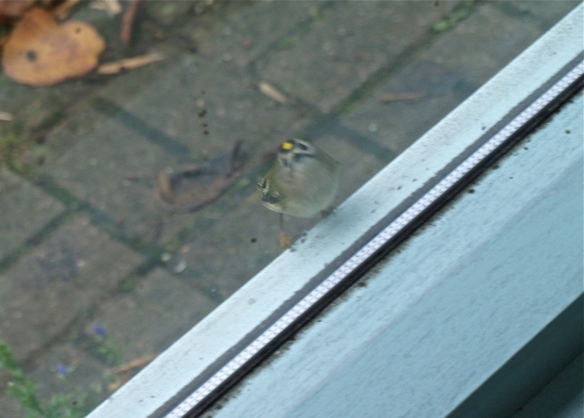 Tomorrow I shall have a peaceful day, signing copies of Border Line (or twiddling my thumbs) at the wonderful Gog Magog Hills farm shop.

29 thoughts on “Publication day and the blood pressure challenge”