All through spring and summer of 1943 starving and diseased POWs from the up-country railway work camps (in Thailand) trickled south to the bigger camps such as Chungkai. Barry reached this camp in July 1943 and was soon fit enough to do some work.

My first and simplest job was basically as a storyteller or rather reader. I would take a likely book from the camp library and sit down on the end of a bed space in one of the sick huts, and read a chapter or two. Then I would move down the hut, twenty or thirty yards, and read the same piece to another lot of sick men. This was judged to be a useful employment, so I was never called on to join a maintenance party.

In October the two parts of the railway, Thailand and Burma, joined up at Konkuita and from then on sick and dying men poured into Chungkai transported by barges or on the railway itself. Meanwhile Barry began to enjoy the theatre and concerts got up by enterprising prisoners, but found that:

These jolly functions contrasted harshly with our work in the sick huts, which got steadily worse as more parties of sick and dying arrived from up river. We were burying ten, fifteen, or even twenty every day, and it was disconcerting during my readings to become aware that one or two of my audience were never going to hear the next chapter. 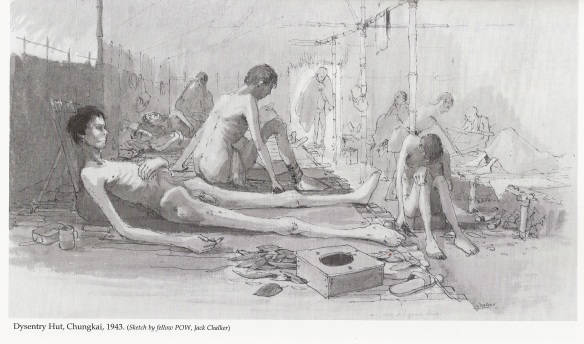 From Peter Fyans biography of Fergus Anckorn: Captivity, Slavery and Survival as a Far East POW, the Conjuror on the Kwai

He progressed from reader to Lady Almoner

The job of Almoner, or “Lady Almoner” as it was called, involved the actual distribution of goodies bought from the welfare fund, to the sick men in the huts. The most useful purchases were eggs, honey, palm syrup, and occasional pots of vegemite, the Australian marmite. There was, of course, not nearly enough for everyone, the M.O. in charge of a particular hut would give me a list of the men due to receive these extras and the quantities for each one.

I did not at first realise the difficulty of the job but it became clear soon enough. Most of the very sick men got nothing at all because, as the M.O. told me, they would die anyway. The extras, very carefully husbanded, would go to those men who were able to profit from them and might just recover with their help but who would die without. At least I was spared the agony of deciding who got what, but every day I was faced with the need to find answers. “I am much sicker than Joe, Sir, why does he get two eggs this week and I get none?” An unanswerable question to which I had to find some reasonable answer day after day. I talked to the other Almoners and had no comfort from them, all in the same position as I was. “Tell them Orders is Orders, and you are just doing what you are told to do.”