Some time at the end of April 1945, Phyllis, with the dossier of information and photos of Barry’s men, interviewed a Sergeant Smith, from the Royal Signals. Smith had been a prisoner of the Japanese and was rescued after the sinking of the transport ship Hokofu Maru. He knew Barry and other men from 27 Line Section. In her notebook Phyllis  scribbled entries for each man who Smith remembered having seen. For example:

Appleton. Saw him in June ’44. Excellent condition. Down ? Tech. Party due for Japan but hadn’t left [‘Japan party’ are the groups of men selected to be shipped to Japan]. Worked with Smith as Cook after completion of railway in Tamarkan hospital camp. One /or 2 attacks/malaria but survived them well, often spoke of his children and wife. 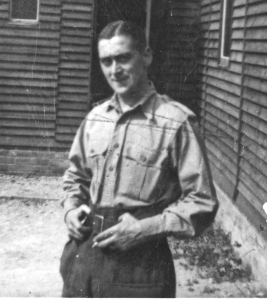 Douglas. June 44. Sick in 1943 but recovered. Worked in Japan cookhouses as servant which gave him extra. Mentioned both wife and son. Kept out of trouble.

Earnshaw. 1944 June. Health quite good. Mentioned fiancée a lot. (sister?) Packed up on railway in 1943 August. No party for Japan.

Graham June 44. Quite good health. Pelagera [pellagra – lack of vitamin B3] – but recovered by June 44. No party for Japan.

Jennings June 44. Quite well. Not on railway.

(In September 1943 The War Office had written to Mrs Jennings to say that her son, Reginald, had died of beri beri malaria on 18.7.43. Scepticism had long since set in among the relatives and she had still sent a photo and information about her son to Phyllis for the dossier. The War Office had been right and Smith must have thinking of another Jennings.)

Russell June 44. In quite good health – quite cheery. Always speaking of wife & 2 boys.